2018 will be remembered for its long hot summer. Perhaps we will not remember the beast and mini beast from the east at the end of winter or the cool wet spring that made life difficult for some of our wildlife. It will be some months before all of the data has been collected and analysed by BTO, RSPB, Butterfly Conservation etc . These notes are an anecdotal account of our summer in the parish.

Some of our summer visitors failed to return this year. At home, House Martins (11 nests in 2017) managed only two nests this year one of which was probably unsuccessful. There seemed to be fewer Swallows and House Martins around the village this year. Our commonest two warblers, Chiffchaff and Blackcap, were around in good numbers but Whitethroats, Lesser Whitethroats and Spotted Flycatchers were all harder to find than in previous years. Resident birds also had mixed fortunes. Kingfisher sightings were fewer than usual; the severe winter was the most likely cause. There are not many Blackbirds and Song Thrushes around at present (early October) suggesting that these species had below par breeding success. On the other hand some of our new colonists seem to be thriving. Both Red Kites and Little Egrets continue to be seen regularly.

Long hot summers are meant to be good for butterflies but this did not seem to be the case locally. Only four species seemed to do well. Orange Tip were around in good numbers throughout much of April and May; Speckled Wood seemed to be on this wing all summer in suitable locations and our two blue butterflies (Common and Holly Blue) were both more numerous than usual in late August and September. Other species had very short flight seasons and/or low numbers. Two of our most recognisable species, Small Tortoiseshell and Peacock were dramatically reduced. If you have a Buddleia in your garden you almost certainly saw fewer large butterflies than usual. A slightly unusual visitor to a Buddleia in September was a day-flying Hummingbird Hawkmoth. Which brings me onto:

The hot weather and especially the warm nights made 2018 a special year for "mothers" ie people who study moths. From the last week in June numbers caught in the moth trap exceeded 100 regularly, peaking at 360 moths on 14th July. Emptying the trap, recording, photographing anything out of the ordinary and identifying possible new species for the garden can be very time consuming during this peak season. Approximately 300 species were recorded in our garden, some single night counts included 79 Dark Arches, 59 Setaceous Hebrew Character (great name), 49 Large Yellow Underwing and 45 Common Footman. 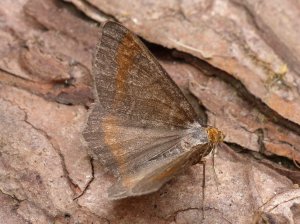 Two difficult to identify moths were in the trap on the morning of 6th August. Tawny-barred Angle is an uncommon moth locally (I had only caught one before) so catching a rare melanistic form of this moth was a highlight in itself. 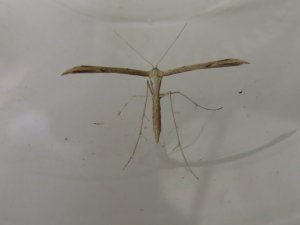 However the other moth was even more unexpected. Plume moths are very delicate moths, they sit in a crucifix shape and a large one, White Plume, is thought to have accounted for historic sightings of fairies at the bottom of the garden! The plume that I had caught was outside my experience. The best match in the Field Guide was a species called Mugwort Plume, a moth only once previously recorded in Leicestershire and Rutland. The moth was photographed and passed to the County Moth Recorder for further photographs as there are two similar moths neither of which has been recorded previously in the County. We think that it will, in due course, be accepted as a Mugwort Plume.

October has produced more good moth records but more of that at a future time.

This autumn/winter, BTO (British Trust for Ornithology) volunteers are surveying Tawny Owls. Volunteers spend 20 minutes each week in the garden, after dark, listening for (Kee-Vik – female) or (OOh – hooting males). If you hear (Kee-Vik - OOh) or (TWOWHIT - TWOHOO) this is a calling pair. So far I have concluded that it is far noisier outside than I imagined, cars, trains and planes seem to be everywhere! However I have heard one Tawny Owl, albeit at 06:20 on a Sunday morning when the world was relatively quiet.

If you hear any Tawny Owls the BTO and I would be interested to know. The canal area, Manor grounds and the spinneys between the village and Oadby are all areas where I have heard them in the past.