Did you see any saw-bills?

In most years, October brings at least one decent spell of anticyclonic weather with easterly winds and a flood of migrating birds; initially to the east coast and then to inland counties. The spectacle of large numbers of migrants and the expectation of rare birds often from very remote parts of Eastern Europe and Asia are a highlight of the year for most birdwatchers.

October 2017 was a washout (quite literally) with persistent weather systems from the Atlantic. Highlights have been few and in our parish, unspectacular. 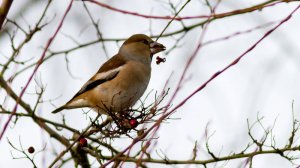 The greatest surprise in terms of large scale migration has been an unprecedented number of Hawfinches which entered England on a very wide front and have continued to turn-up in good numbers through into 2018. There have been many sightings in Leicestershire but none as yet in this area. They are easily overlooked so they may have occurred but not been found. They are a tree-seed and berry feeder, particularly associated with Yew and Hornbeam but not unknown from other mature trees and at times they turn-up at bird feeders in gardens. Look out for: a large finch with an enormous bill (capable of cracking cherry stones), prominent white flashes in the wings when in flight and a white-tipped tail. Males in particular have an orange-brown head and the basic body colour is a warm buff. They sometimes sit high up in trees and in winter they are then observable, but beware Greenfinches which though smaller can look fairly large headed. Hawfinches and Greenfinches have something in common with Eagles and Buzzards as seen by first time visitors to Scotland. If you think you might have seen a Hawfinch it was most likely a Greenfinch. If you do see a Hawfinch you will be immediately impressed by its large head and bill. You will also, I hope, let me know a.s.a.p. 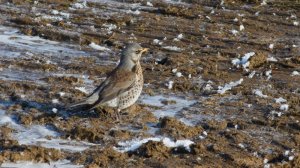 So what exactly has been seen locally? We expect to see "winter" thrushes: Fieldfares, Redwings and increased numbers of Blackbirds and Song Thrushes. Though late arriving, there are now reasonable numbers of Redwings and Fieldfares around the village and an increase in Blackbird numbers. 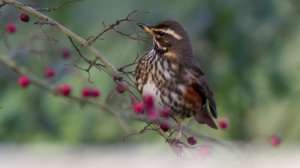 They are often feeding on the ground and relatively close to a hedge in the event of needing to escape from any passing raptors. In flight, Fieldfares make harsh "chack-chack" calls whereas the slightly smaller Redwings make a softer hissing call. They can be found in mixed flocks and will visit gardens in harsh weather. 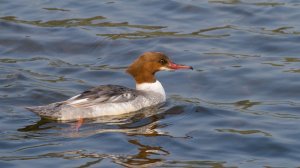 Possibly the highlight locally was the appearance of two Goosander (ducks) at Wistow Pool for over one week from 29th October. These were (possibly) the two first birds in Leicestershire this winter.

Goosanders are "saw-bills". They have long bills with serrated edges making it easier to catch fish. As this is how they survive, the birds spend much of the day diving and chasing fairly small fish. There are only three species of saw-bill seen regularly in the UK: Goosander, Red-breasted Merganser and Smew. I am not aware of any Mergansers or Smew having been seen in the parish but the occasional individual or small group of Goosander has turned up over the years. Wistow Pool, Newton Croft Farm Lake and Great Glen Lake (obviously not in our parish) have all had visits in the past. Most sightings are in late autumn/winter.

The two birds in October/November were "brown-heads". These are females or immature males. These are not easily separated without close views. Although brown-heads are large and attractive ducks, the males when they turn-up are spectacular: pink bodies, bright green heads and red bills.

Whatever the weather there is always something to see and if it is unusual in your garden it might be rare in our area. Let Graham or I know; it would be great to include what you have seen in future notes.