This "Summer" has been far from memorable weather-wise. There have been occasional hot spells but no long period of settled sunny weather. Sometimes mediocre weather in July and August is compensated for with a spell of high pressure and calm sunny days in early autumn. It has not arrived yet (October 8th) and is still not showing-up in the current seven day forecast. Good weather in November is not unknown; we live in hope.

As summer is the best season for insects, there have been some highlights locally that are worthy of a mention. 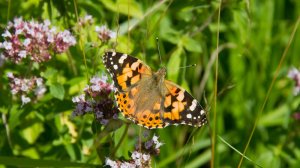 Notwithstanding their small size and negligible mass, some insects undertake significant migrations; taking advantage of favourable air currents. The migrant butterflies that appear most frequently are Painted Lady and Clouded Yellow. This year numbers of these species have been low and my only sighting locally was a single Painted Lady beside the road to Wistow. 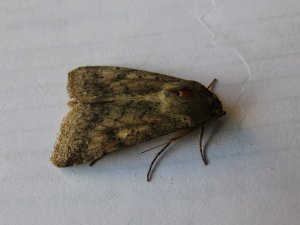 Regular migrant moths include Silver Y and Hummingbird Hawkmoth. I have trapped Silver Y regularly this summer but have not seen any Hummingbird Hawkmoths. As these are day-flying they can be seen "nectaring", feeding like tiny hummingbirds. Have you seen any in your garden this year? One of the scarcer migrant moths "Scarce Bordered Straw" is mainly seen at coastal locations and one that turned up in my trap on 28th August was a new moth for Newton Harcourt. As the photo shows, it is not a particularly spectacular moth to look at. 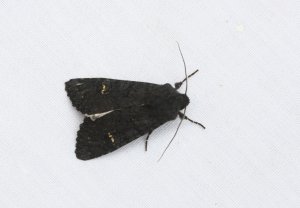 Probably the "moth of the year" however has been a smart looking mainly black moth, "Black Rustic". Proving that monochrome can sometimes match the wonders of technicolour, this is an elegantly slender moth, jet-black except for a white "stigmata" on each wing. The males especially have pure white underwings that contrast amazingly. September is the best month to find this moth and on 23rd September I trapped 7. I was very pleased because I only usually trap the odd one or two. On 25th September I trapped 25 and a few e-mails later it was obvious that this was a number unheard of in Leicestershire.

By 29th September, there were still 10 around my garden that ended-up in my trap in and I decided that I ought to obtain a photographic record of the event. Fortunately it was a fairly cool morning so the moths were obligingly calm and I managed to photograph all 10 without any making a bid for freedom.

Many of the other specialist autumn moths are yellow, orange and/or brown to match the autumn leaf colours so hopefully there will be a few settled night before the end of October. 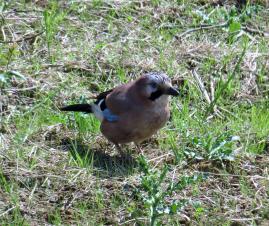 From now onwards, is a good period for seeing corvids (crows) and thrushes. One of our local dog walkers has already seen all six of our local crows in the course of a single walk. Jackdaw, Magpie, Rook and Carrion Crow are there to be seen every day but the other two are a bit special. Ravens, our largest crows, are best located by hearing the loud "cronk" call. Given good views its size, glossy plumage, diamond-shaped tail and heavy crop can all be seen but beware as Rooks can show some of these features. Our other crow, the Jay, doesn't look crow-like with its pink and blue colours and a noticeable white rump as it flies away. They are uncommon in the Parish for most of the year but can be quite numerous in the autumn when birds move into the country to avoid the harshest weather in northern Europe. Also at this time British birds rove around looking for acorns which they store by burying.

From late October vast numbers of thrushes come to Britain from northern Europe. The two most often noticed are the birds that don't breed here, Fieldfare and Redwing. However, many of the Blackbirds and Song Thrushes seen locally in winter will have spent the summer hundreds of miles to the north and east of the UK.

Please let Graham or I have any plant or animal photos that you take locally for the web-site.