Birds on the Move

We are familiar with bird migration. As I write this we can to signs of spring all around us and we know that in a few weeks we will have swallows in our village following their long flight from southern Africa.

What is less well known and much less predictable are the movements made by birds (sometimes in very large numbers) when weather events disrupt the availability of food. This winter we have had four separate snow/ice events starting on 9th & 10th December and including "The Beast from the East" and its subsequent mini-beast.

Although not fully understood, scientists are aware that wild animals not only re-act to adverse weather but in some instances anticipate storms and move before they arrive. The most likely explanation is that creatures in the wild use senses that are less well developed in humans. These include awareness of changes in atmospheric pressure and sensitivity to vibrations in the atmosphere and (in the case of fish and aquatic mammals) in the water.

This long pre-amble is to explain a number of uncommon bird movements this winter that have led to some unexpected sightings in the first three months of the year.

Very strong winds were forecast for the Norfolk Coast on the week-end of 6th & 7th of January and a large movement of Pink-footed Geese commenced ahead of the storm. Flocks of birds were reported passing over the North Midlands on 5th January, heading for the Mersey/Ribble Marshes. This area and North Norfolk are the main wintering sites in England for these geese. 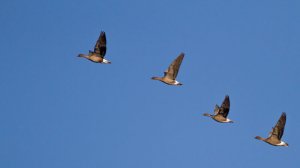 On the morning of 6th January I was walking along the Burton Brook between Great Glen and Burton Overy when I received a message that over 100 "Pink-foots" had flown west over Tilton. About 15 minutes later I heard the "wink-wink" call of flying geese and counted about 120 birds flying over Glen and heading towards Newton Harcourt. They very probably flew over our village and possibly over The Pines but I will never know! My assumption was that the Tilton birds had picked-up the line of Burton Brook and were moving west along its valley. However large flocks were reported from across the County that morning so tracking the route of individual groups will probably not be possible.

I hardly expected a second surprise event but shortly after the geese I noticed another group of large birds flying towards me from the east. I guessed that these might be "special". They were swans and were calling (so not Mute Swans from elsewhere in the County). They were in fact 13 Whooper Swans, most likely moving away from the Ouse or Nene Washes. These birds were seen again, as they were found around lunchtime resting on Albert Village Lake on the Leicestershire/Derbyshire border. As with the geese, the birds were heading towards and almost certainly passed-over our village. 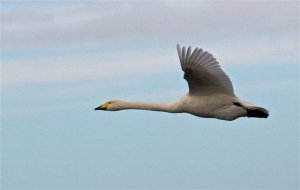 Eight days later, on the morning of 14th January I took the bridleway from the western end of Newton, heading towards Glen Gorse. I was hoping to find Yellowhammers and Skylarks on the "top" fields. Instead I was treated to 2 more Whooper Swans (an adult and a juvenile) flying east along the "valley" between here and Oadby followed by a Great White Egret (aka Great Egret) flying west.

Although Little Egrets are becoming a regular sight in the parish, its larger relative has not previously been recorded in Newton Harcourt. There were several Great Egrets at Rutland Water over the summer but numbers declined later in the year with only one or two birds present into 2018. Whether this bird came from Rutland Water and where it was heading to is not known. However wetland birds tend to find more open water and feeding areas in western areas of Great Britain when the weather turns cold. It could have ended-up in the South West, West Wales or even Ireland. 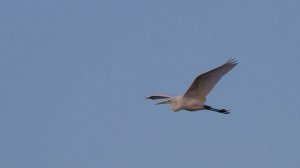 The arrival of "The Beast from the East" from 28th February impacted significantly on wildlife. Some birds will have flown away but where to, with so much of the country under snow and ice? It is feared that some of our truly resident birds will have failed to find the food needed to keep them alive. We will only know the extent of the impact when 2018 breeding surveys are carried out but birds such as Wrens and Kingfishers are likely to have suffered population losses.

Locally, some birds became more noticeable as a result of the bad weather. I received a number of reports of Redwings and Fieldfares coming into gardens to feed (they seemed very fond of chopped up apples). Fieldfares are handsome birds but they weren't always welcome. In one garden they "monopolised" the offered food by driving away the resident Blackbirds and Robins. For at least three days a party of 7 Lapwings appeared on the sheep fields between Newton and Wistow and at least two of our dog walkers not only saw them but commented that these were unusual sightings 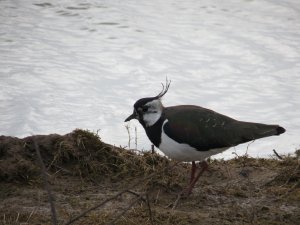 Although not necessarily weather related, two other "special" birds were seen in Newton recently. On 16th Feb. a Peregrine Falcon drifted over Wistow lane heading east. Possibly the same bird was seen two days later near the Wistow cross-roads. A very large flock of Woodpigeons was feeding on fields west of Wistow so it is likely that the Peregrine was attracted to the area by the availability of its favourite prey. The name Peregrine comes from "peregrination" ie wandering. Outside the breeding season Peregrines can roam widely looking for good feeding opportunities.

Finally, a Barn Owl was seen on the eastern edge of the village beside Glen Road at 9:40 pm on 20th March and at the western end near the Wigston Lane T-junction at 6am on 22nd March.

Hopefully April will eventually bring some warm weather and those swallows.

Thank you to Rod Baker of Wigston who provided photographs of some of the species mentioned in the text.