Wistow and Newton Harcourt
Flora and Fauna – Sites and Habitats 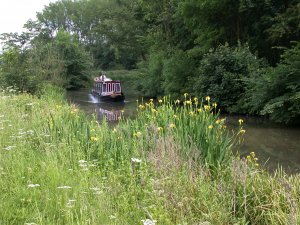 The Parish is still essentially rural and benefits from having diverse habitats in a small area. Many of the best sites for plants and animals can be easily accessed within a short walk of Newton Harcourt village centre.

Water is a basic ingredient of all life and permanent water attracts all manner of wildlife. We are fortunate in having four significant water features in the Parish plus a number of smaller ponds, including artificial ponds in gardens.

Diversity:
Our clay soil supports only robust wildflowers. This is not an area to search for orchids and delicate chalk loving species. However even our common species can provide spectacular splashes of colour in spring/summer: Red Campion and Cow Parsley in ditches: Creeping Buttercups and Dandelions in fields by the R. Sence; Violets, Meadowsweet and Flag Iris along the canal; (introduced) Aconites and Snowdrops in the Churchyard and Manor grounds at Newton Harcourt and masses of white Hawthorn (May) Blossom especially along the railway cutting. The commonest tree species occurring naturally in this area (Oak and Ash) are complemented by planted trees including Holly and Beech beside the Newton to Wistow Road and Poplar beside the canal at Wistow. Alder and Willow species can be found in damp habitats adjacent to the water bodies listed above. The Canal is a good site to look for interesting rushes, sedges and flowering plants. Try finding Flowering Rush, Water Figwort, Water Soldier and Gipsywort.

Birds are mainly active by day and are large enough to make identification at least "possible" if not easy. Over 130 species have been recorded in the Parish since 1980. In excess of 70 species are recorded each year.

17 species of Odonata (Dragons and Damsels) have been recorded. The canal has a good population of White-legged Damselflies (a relatively uncommon species) and Newton Croft Farm Lake has had breeding Small Redeyed Damselfly, Common Emerald Damselfly and Emperor Dragonfly.

23 species of Butterfly have been recorded since 2010 (including a single White-letter Hairstreak and occasional Essex Skippers). Wall butterfly was formerly recorded in Newton Harcourt but has not been seen in recent years. Five years of Moth trapping has produced 320+ species including one species of micro moth not previously photographed in Leicestershire. By-catch whilst moth trapping suggests that Beetles, Shield Bugs and other insects are well represented but these have not been studied.

Mammals recorded/reported include Muntjac, Otter and Mink. Our arable fields are a good place to see Hares. Foxes and Badgers are common but the latter are not often seen. Pipistrelle (at least one of the three native species), are often seen on warm summer evenings and unidentified larger species sometimes hunt over the canal at dusk.

The commonest reptile seen is Grass Snake (along the canal but more frequently in gardens with compost heaps). Frogs, newts and small rodents are the most likely prey species for Grass Snakes but birds' eggs and small chicks are also taken.

Recording:
naturespot.org.uk is an excellent site to help with identification of anything you find or photograph. As it is a Leicestershire site it avoids looking through photographs of species that are only found in other parts of the UK.

Alternatively if you photograph or spot anything interesting please forward it to Graham Handsley: clerk@wistowcumnewtonharcourt.org.uk

or me as we hope to provide regular up-dates of sightings in the Parish.
David Scott: scottpin@btinternet.com