As anticipated in the Jan-March Notes, insects and wildflowers are more numerous and obvious from spring onwards; whilst bird activity around the village reflects the departure of winter visitors and the influx of summer visitors from southern Europe and Africa.

Our resident birds have been relatively successful although the Blackbirds that feed their off-spring energetically in my Honeysuckle had their chicks predated before they could fledge. They sometimes overcome the initial set-back by raising a second brood. Grey Herons and Mute Swans have nested successfully at Wistow and two Little Egrets have been seen from time to time on R. Sence, at Wistow Pool and at Great Glen Lake. It is possible that they will try to breed in the area within the next few years. Grey Wagtails collecting food at Wistow Pool were feeding young at a nest near Wistow Church in May. Kestrels had a tree-hole nest in Wistow car-park and Tawny Owls presumably nested in or near the village based on the frequency of their nocturnal calling. 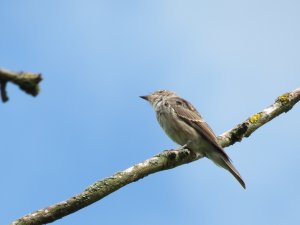 The most eagerly awaited of our summer visitors are Spotted Flycatchers (image left); this is a declining species. I heard my first calling bird on 21st May whilst leading a Great Glen WildSpace walk and it showed briefly on the edge of the Manor grounds. Subsequently birds have been seen in both Newton and Wistow churchyards and with luck young birds should be seen in the next few weeks.

Although Swallows and House Martins were in the County (in small numbers) in early April nesting activity was slow to commence. Although House Sparrows commandeered some of the 2016 nests I currently have 11 active House Martin nests and other properties in the village also have nesting birds. Swallows are around all of the time, using their usual nesting barns and we have seen occasional parties of Swifts hunting over the village especially when there is a low cloud-base/ damp weather forcing flying insects nearer to the ground.

Orange Tip (see above, thanks to Rod Baker), Brimstone and Holly Blue (see below) are colourful early spring butterflies that may have visited your garden. They all fit their names well: Orange Tip has white wings with orange tips, Brimstone is sulphur yellow and Holly Blues are often seen around holly trees/bushes (also fond of Ivy) and are a delicate silvery-blue colour. If you missed seeing Orange Tip you will probably have to wait until April 2018 but the other two species have two generations each year and Holly Blue in particular is more numerous in July and August. The next three months is the peak time for butterflies in gardens, especially drinking nectar from flowers. If you need help with identification I have a helpful chart on one side of A4 that you can borrow.

Other insects have been increasingly active from May onwards. Some can be a nuisance but most are delightful and many are very beneficial in the garden. The hot weather in mid-June brought well over 100 moths to my moth light on two successive nights. In excess of 80 species were recorded from tiny micro moths to spectacular Elephant, Privet and Eyed Hawk-moths. Other insects are attracted to the light and Cockchaffers, ground beetles, caddis flies, wasps and the occasional Bumble Bee have sometimes been in the egg boxes with the moths; fortunately they were usually sleeping-off their night out. 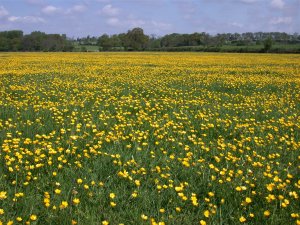 Once again, the May blossom on the Hawthorns along the railway has been "better than ever". The Flag Irises were spectacular along the canal in May and hedgerow plants including Red Campion, Cow Parsley and Green Alkanet (blue flowers) brightened up the ditches and temporarily hid any discarded beer cans and burger litter. If they were rare, people would travel miles to see the buttercups in the field beside Wistow Church in May each year.

Although there are some late flowering plants it is generally down-hill from now onwards although thistles and related species, and bindweeds, are colourful plants to look forward to. Flowering aquatic plants and tow-path flowers such as Woundwort and Water Figwort are usually at their best in July.

This brings us nicely to the summer months. The canal and tow path is often at its best in summer. There are some interesting dragonflies and damselflies to see if you amble quietly on a sunny day; I look forward to receiving some pictures of anything that you find.